Six months ago I wrote an article about five really good death metal albums of the last year. I first decided to interview Burial Invocation, one of the bands I mentioned in the article. Then I realized there’s another one that need more space on this website. Among the good extreme metal releases of 2018, Demonomancy’s Poisoned Atonoment is an opus that needs your attention. If their debut Throne of Demonic Proselytism was closer to their biggest influences (Beherit, Demoncy, Archgoat), their second record is way more personal and evil. I sent a few questions to their bandleader, The Unbaptised Sherperd, composer of most of their material and the last former member remained in their line up. 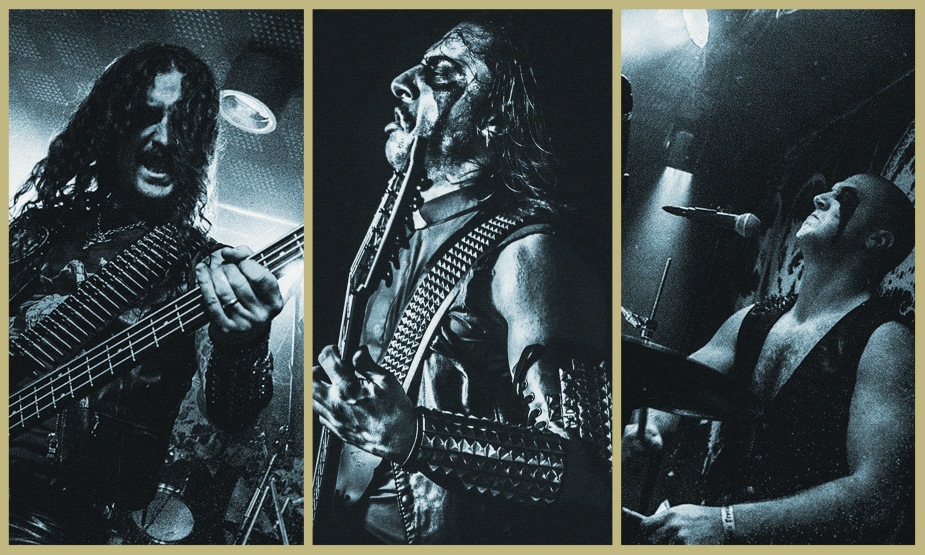 The year 2018 saw the release of your second album, “Poisoned Atonement”, 4 years after your previous full-length “Throne of Demonic Proselytism”. This new work is much more mature and diversified. Was your creative process influenced by the almost total line-up change?

The change in the line-up was definitely a factor, but likely not as much as people might have expected. The earliest attempt to revolutionize our sound was the song “Archaic Remnants of the Numinous”, which I created and then arranged in several months with the old line-up, modelling it around the taste of each member.

When I learn new creative methods I always try to improve them exponentially, so this sound revolution had already begun with the old line-up. The introduction of the new drummer Herald and his trust towards Demonomancy have definitely influenced me very positively in re-imagining our sound from scratch. With a new line-up ready for action, my fantasy began travelling far, but I won’t hide that the new changes I decided to embrace surprised the new members as well, because they knew they should expect something new, but did not know exactly what. When they listened to the earliest demo of “The Day of the Lord” they were initially perplexed, considering the very evident divergence from the old material (as well as a good part of the new material). Similarly, my decision to add the initial high shriek in “Fiery Herald Unbound (The Victorious Predator)” was subject to debate more than once.

As the album came out among approval and celebration by fans, choices like these are now normal and they are the reason why I’m looking for new ideas that might spark new debates: only that way I will be sure I am doing a good job.

The song “Archaic Remnants of The Numinous” (already featured in the split with Finnish Witchcraft) was inspired by some of Carl Gustav Jung’s work. Which aspect of his theories affected you the most, and in what way do they relate to your esoteric concept?

From a strictly musical point of view, the song is very far from the usual “song structure” and follows a timeline in which elements are almost never repeated, and when it happens they appear in a different form, as in a journey, specifically one towards the subconscious. I have always been attracted to the epic, archaic, biblical and oniric tones of Jung’s work, as well as his descriptions of some of his dreams; the song’s intro (in the split version) and the part with clean vocals are distinct examples.

I titled each verse after some of Jung’s major concepts (The Archetype, The Shadow Aspect, Neuroticism, The Complex)

I was more interested in conveying horrific, partially abrstract and psychological imagery, rather than creating a concept. I only worried about matching the words to the degree of insanity of the music.

“The Day of the Lord”, also featured in your videoclip, is the song that stands out the most for its epic and monumental solemnity, as well as its almost “prophetic” lyrics and vocals. Can you tell us more about it?

I would consider myself a rational person and I don’t believe in God, but I am nonetheless very fascinated by sacred scriptures and I find biblical stories highly evocative. With “The Day of the Lord” I simply wanted to use the tones of the Ancient Testament to explain that if God existed he would not love us at all.

Day after day I am forced to get used to an ever-changing society, which drowns in short-lived pleasures and instantaneous gratifications, which I don’t identify with morally. The “Reborn Babylon” I mention in the song is exactly the Western society to which I cannot adapt. I love order and self-discipline, but my native city Rome, as well as the rest of the West, only gave me chaos, disorder, rampant corruption and a total lack of morality. The idea of a divine punishment compensates for the sense of powerlessness I sometimes feel in this world. When I read about the rain of fire and sulphur pouring down on Sodom and Gomorrah I lose myself in ecstatic fantasies, dreaming that it all could happen in reality.

Are there places in Rome that inspired you for your songs, such as the Alchemical Door for example?

The symbol used for our first demo’s artwork, which appears again on the covers of “Rites of Barbaric Demons”, “The Premonition” and on the seal inside “Throne of Demonic Proselytism” is the same symbol that can be found on the Alchemical Door. Moreover, in “Throne…” we also added the epigraph “FILIUS NOSTER MORTUUS VIVIT REX AB IGNE REDIT ET CONIUGIO GAUDET OCCULTO” (Our son, dead, lives, comes back as king of fire and relishes the occult matrimony) as tribute to this Roman monument.

The title of the “Burnt vitrol” compilation is itself a reference to our earlier interest for alchemy.

The Alchemical Door in Rome

This year is the tenth anniversary of your band’s foundation. Your standard of quality has been going up ever since, and from the very beginning you have been looking for a sound that would be worthy of the names that inspired you. From that perspective, were you able to gain additional motivation to do more from having lived in a hostile environment such as Italy? (which does not offer many chances for the genre of metal)
I believe that whatever the reason, an Italian band, moreso a Roman one, has to make more sacrifices to be able to emerge. That being said, it should be specified that almost all Roman band show gross amateurishness, poor taste, lack of music culture and little interest for travelling to see concerts abroad. I strongly felt the absence of a local band that would show the younger and inexperienced generation the right way to make it in the world of music. The Roman population must first of all be healed from its pathological cynicism that affects it. Only then we can talk about creating something.

I believe that Northern Italy, Lombardy im particular, represents worthily our country abroad, both in terms of bands as well as concerts.

Compared with previous years, you have been playing much more live. In addition to the shows of your European tour with Arkhon Infaustus, you reached cities like Istanbul and Tel Aviv. How have your experience been in those places?
Both experiences have been very positive. My attraction towards Middle-Eastern spirituality transpires from our sound, and I’m proud that my music was exactly what allowed me to set foot in those places.

In 2017 you played in New York for a single show in the United States, at Martyrdoom Fest. Are you planning to go back to the US for an actual tour?

There have been talks about going back there, and we also received some offers, but organizing something successful is not that easy. It would be a great experience, considering also the great number of valid bands on US soil we might share the stage with!

For some time now, you have been working in your recording studio “The Devil’s Mark”. The most prestigious name you collaborated with so far has been Destroyer 666, for the vocals and some guitar/bass parts on their EP “Call of the Wild”. How was this collaboration born?

I had already had a chance to visit KK’s house, so when he told me that he needed to record the vocals for the new EP I offered to bring what was needed to his place for a session of local recording. We took this chance to review the arrangement of the songs, changing, removing or adding solos. I am very proud of having left a little mark on the history of this band. I have a great memory of that session, the atmosphere in that house was very special.

On the same topic: are there metal (or non-metal) producers you see as models for your work?

I love the “signature” drums sound of the Grieghallen Studio (the one from which “De Mysteriis Dom Sathanas” came out, to be clear). I think it set a new standard in extreme music.

I am also strongly fascinated by the versatility of Rick Rubin. Although I am not interested in many of the artists he worked for, I admire his ability to empathize with each artist. We are both born on March 10th… could it mean something? He’s the producer of “Reign in Blood” after all, goddamn it!

We often hear the black/death metal cauldron being summarized in the somewhat vague and ambiguous definition of “war metal”. What’s your take on that?

I don’t worry too much about labels.